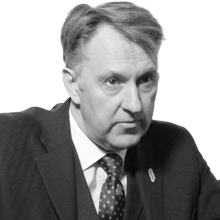 David Clarke is a Director and Head of Integrity & Due Diligence at Guildhawk which provides multilingual research, e-discovery and secure languages services to corporate clients across the globe. His clients include OSCE, the Centre for Democratization of Armed Forces (DCAF), Greenbrier Inc and Mitsubishi.

He is also the Chairman of the Fraud Advisory Panel charity, the voice of the counter-fraud community in the UK, and leads their COVID-19 Fraud Watch Task Force with Cabinet Office, the police and business partners.  David is a regular commentator in the press and on BBC Television.

David has a distinguished career and as a police investigator for over 30 years’, he led cross-border operations in the UK, USA, Europe and Middle East for the City of London Police and the UN in Bosnia Herzegovina.

A former Detective Chief Superintendent and as a member of the United Kingdom Government’s Attorney General led Fraud Review, he was responsible for designing and implementing ground-breaking services and technology including the National Lead-Force for Fraud and the National Fraud Intelligence Bureau (NFIB), the first unit of its kind in the world.