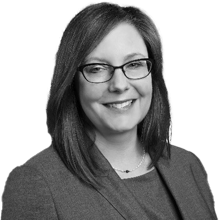 Andrea Gacki is the Director of the Office of Foreign Assets Control (OFAC) of the U.S. Department of the Treasury. OFAC is the federal agency charged with implementing and enforcing economic sanctions on behalf of the U.S. government.

Andrea has previously served as the Deputy Director of OFAC, since March 2017. She also served contemporaneously as the acting Deputy Director and as the Associate Director for Compliance and Enforcement at OFAC from 2014 until March 2017. She was also OFAC’s Assistant Director for Licensing from 2010 to 2014. Andrea first joined OFAC in March 2008 as the Senior Sanctions Advisor for Program Policy & Implementation.

Prior to joining OFAC, Andrea was a trial attorney in the Federal Programs Branch of the Civil Division of the U.S. Department of Justice, where she represented OFAC by, among other things, defending against designation challenges brought by the Al-Haramain Islamic Foundation and the Islamic American Relief Agency, and where she served as a senior member of the Justice Department’s Terrorist Designation Team. Before joining the Justice Department, Andrea was an associate at the law firm of Hogan & Hartson LLP (now Hogan Lovells LLP), and she clerked for the Honorable Avern Cohn on the U.S. District Court for the Eastern District of Michigan. She is a graduate of the University of Michigan Law School and the University of Michigan-Ann Arbor.