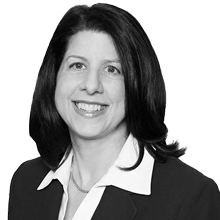 Meryl Lutsky currently serves as the Chief Compliance Officer and Managing Director of Investigations at T&M, a corporate investigations firm based in New York City, where she drives the overall compliance policy for the firm, assists clients with their compliance needs, and supervises anti-money laundering and financial crime investigations.  Meryl has been with T&M since 2018.

Prior to working at T&M, Meryl served for twelve years as Chief of the Money Laundering Investigations Unit and Chief of the Statewide Crime Proceeds Strike Force for the New York State Attorney General’s Office, where she investigated and prosecuted violations of money laundering as well as violations of the Banking and Tax laws.  She led a task force of regulators, civil and criminal investigators, agents, auditors, and attorneys from multiple federal, state and local law enforcement agencies.  She prosecuted cases in both state and federal courts and maintained Top Secret Clearance while conducting investigations with the Joint Terrorism Task Force.

Before she ran the Strike Force, Meryl spent four years tracking down and prosecuting organized crime figures at the Organized Crime Task Force.  Meryl started her legal career as an Assistant District Attorney at the Queens County District Attorney’s Office.

Meryl is also a noted public speaker and subject matter expert in the field of money laundering and financial crime, speaking at conferences throughout the world.  She is a past recipient of the ACAMS Anti-Money Laundering Professional of the Year award and is currently Co-Chair of the ACAMS New York Chapter.