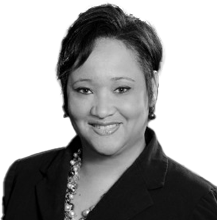 She began her regulatory career with the Authority in 1999 in the Investments Supervision Division, formerly the Investments and Securities Division, where she held various positions before climbing the ranks.

In 2009, Mrs. Myles transferred to the Policy and Development Division as Chief Policy and Development Officer and was later promoted to Deputy Head. During her time there, she developed regulatory measures and coordinated private sector consultations, as well as monitored domestic and international financial regulatory developments in order to provide updates and recommendations to the Authority’s senior management and the Board of Directors as required.

Mrs. Myles also has extensive regulatory training, including a 6-month secondment a with local audit firm and various training programmes hosted by the Caribbean Financial Action Task Force; the World Bank; the Financial Stability Institute, and the United States Securities and Exchange Commission.
She holds a Bachelor of Business Administration (International Finance) degree and a Master’s in Business Administration from the International College of the Cayman Islands. She earned the certified anti-money laundering specialist designation (CAMS) in 2006, is an Associate Member of the Association of Certified Fraud Examiners since 2014, and earned the Claritas Investment Program Certificate from the CFA Institute in 2015. She was also trained as a Mutual Evaluation Assessor by the Caribbean Financial Action Task Force in 2016.