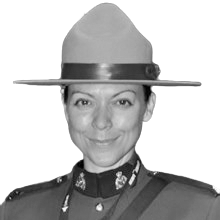 Sergeant Lepa JANKOVIC has been a member of the Royal Canadian Mounted Police for 20 years. She began her career on the East Coast with contract policing and then quickly moved to Federal policing due to her Eastern European background and language abilities. Sgt. JANKOVIC is well known for her role as lead investigator on Project OPAPA, an international human trafficking investigation that saw the convictions of 23 human traffickers. The unique strategy of following the paper trail of money and documents led to the successful prosecution of OPAPA and as a result, Sgt. JANKOVIC was transferred to a Financial Crime Unit. As she successfully led investigations into synthetic identities and international money laundering, she became captivated with the relationship between crime and money. Her passion for forming a relationship between the financial sector and law enforcement in the fight against human trafficking was recognized by ACAMS, who presented her with a Public-Private Partnership Award for her participation on Project Protect.

Sgt. JANKOVIC has worked as an investigator with the Sensitive and International Investigations Unit in Ottawa where she investigated the extraterritorial torture of Canadian citizens abroad. She is currently a team leader of the Anti-Money Laundering Unit for the Greater Toronto Area where she continues to pursue public-private partnerships between the financial sector and law enforcement. Sgt. JANKOVIC is a frequent speaker/trainer on the global stage on human trafficking/smuggling, synthetic identities, and public-private partnerships which includes the Jakarta School of Law Enforcement and the State of New Mexico Emergency Preparedness.