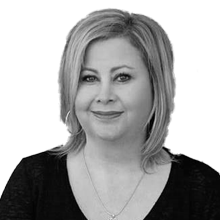 As Executive Director, Lianna McDonald leads the Canadian Centre for Child Protection (Canadian Centre) in all efforts to reduce the sexual abuse and exploitation of children and assist in the location of missing children. In 1998, Lianna joined the organization — then known as Child Find Manitoba — and guided the agency from a grassroots volunteer organization to a national charity fighting child victimization around the world.

Over the past two decades, Lianna has worked with all levels of government, senior law enforcement, educators, and industry to advocate for the safety of Canadian children. She worked with Attorneys General across the country to establish what is now Canada’s luring legislation and oversaw the development and implementation of Cybertip.ca as part of the Government of Canada’s National Strategy for the Protection of Children from Sexual Exploitation on the Internet. She spearheaded the development of the Canadian Centre’s national education programs on child personal safety, and has most recently lead the efforts to implement Project Arachnid around the world. Lianna is the recipient of the Queen’s Golden Jubilee Medal (2002) and the Queen’s Diamond Jubilee Medal (2012) for her continued dedication to the safety of children.