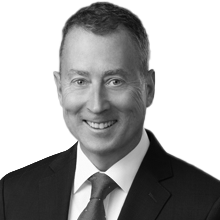 John E. Smith served as the Director of OFAC, as well as its Deputy Director and Associate Director, for 11 years before joining Morrison & Foerster in July 2018. Concurrent with serving as OFAC Director, Mr. Smith also served as acting Under Secretary for the Office of Terrorism and Financial Intelligence at Treasury (January 2017 to June 2017).

While serving as a top official at OFAC, Mr. Smith was centrally involved in all aspects of developing, implementing, and enforcing U.S. government sanctions requirements. As OFAC Director, he oversaw every OFAC enforcement case against financial institutions and global operating companies.  Mr. Smith played a pivotal role as OFAC moved to the center of our nation’s response to the world’s most complex and challenging national security and foreign policy crises, working closely with other governments and multilateral agencies and the private sector. He has overseen the U.S. government’s economic sanctions efforts, imposing sanctions on heads of state, countries, and illicit actors; conducting enforcement actions against dozens of major financial institutions and companies around the world; and developing innovative sanctions enforcement policies to address evolving U.S. national security priorities.

Mr. Smith is now co-head of Morrison & Foerster’s National Security practice, and a member of the Global Risk + Crisis Management group and Investigations + White Collar group. Both in the United States and globally, clients turn to Mr. Smith for his deep experience and unique perspective on the complexities and escalating risk of U.S. and multilateral sanctions. He is a trusted advisor for clients navigating significant civil and criminal enforcement actions by U.S. and other government prosecutors and regulators. John was named by Global Investigations Review (GIR) in November 2019 as one of the most respected Washington, D.C. sanctions lawyers.