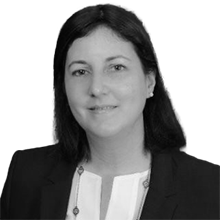 Jacqueline Shire is currently serving as the finance expert on the ISIS-Al-Qaeda-Taliban Monitoring Team at the United Nations Security Council (also known as the 1267 Monitoring Team). Until August 2018, she was the director and global head of U.S. Sanctions for Bank of Nova Scotia. Prior to joining Scotiabank, Ms. Shire served as a director of the Global Sanctions Advisory Group at Bank of Tokyo Mitsubishi. From 2010 through December 2014, she was the U.S. member of the United Nations Panel of Experts on Iran and sanctions, advising the UN Security Council on effective implementation of Iran-related sanctions by UN Member States and investigating reported cases of noncompliance by Iran.

Ms. Shire began her career as a foreign affairs officer at the Department of State where her work included nuclear non-proliferation, export controls, and arms trade licensing. Ms. Shire has also worked for a Washington, DC-based think tank, where she investigated and wrote extensively on illicit trade networks. She served for four years as a consultant to ABC News Investigative Unit, developing and contributing to reporting on foreign policy and national security issues. Ms. Shire holds a BA from Columbia University, and a master’s degree from Columbia’s School of International and Public Affairs.