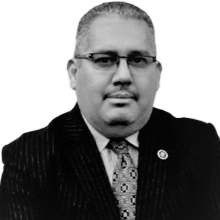 David M. Luna is President and CEO of Luna Global Networks & Convergence Strategies LLC. A former US diplomat and national security official, David is a globally-recognized strategic thought leader, and a leading voice internationally on transnational threats, international affairs, geopolitical risks, illicit trade and global illicit economies ("dark side of globalization") that fuel greater insecurity and instability around the world. Mr. Luna held numerous senior positions with the U.S. Department of State, Bureau of International Narcotics and Law Enforcement Affairs (INL), including directorships for national security, transnational crime and illicit networks, and anti-corruption and good governance; and was an advisor to the Secretary’s Coordinator for the Rule of Law. Mr. Luna also served as an Assistant Counsel to the President, Office of the Counsel to the President, The White House; and other positions with the U.S. Department of Labor and U.S. Senate.

Mr. Luna is currently the Chair of the Business at OECD Anti-Illicit Trade Expert Group; Chair of the Anti-Illicit Trade Committee of the United States Council for International Business (USCIB); and previously served as the President of the OECD Task Force on Countering Illicit Trade; Vice Chair of the World Economic Forum’s Global Agenda Council on Illicit Trade and Organized Crime, Chair, APEC Anti-Corruption and Transparency (ACT) Working Group, and in other leadership positions in the G7, and other diplomatic fora and public-private partnerships on anti-crime and global security. Mr. Luna is also a Senior Fellow for National Security and co-Director of the Anti-Illicit Trade Institute at the Terrorism, Transnational Crime, and Corruption Center (TraCCC), Schar School of Policy and Government, George Mason University. David is a graduate (M.S.S.) of the U.S. Army War College, and received his B.A. from the University of Pennsylvania, J.D. from The Columbus School of Law, The Catholic University of America, and awarded numerous certificates from the Harvard Business School (HBS).