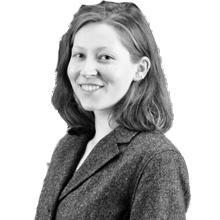 Alexandria Reid is a Research Fellow in the Organised Crime and Policing team at RUSI. Her research covers a range of topics related to serious and organised crime, including environmental security, illicit trade and related illicit financial flows. She is Project Officer for the Strategic Hub for Organised Crime Research (SHOC) at RUSI, and a Guest Lecturer for the Marjan Centre for the Study of Conflict and the Environment, King’s College London, where she teaches gender and environmental security.

Alexandria holds an MA (Distinction) in Conflict, Security and Development from King’s College London. Prior to joining RUSI, she was a Programme Officer for the Centre for Grand Strategy and an MoD-funded Research Administrator at the King’s Centre for Military Health Research. She holds a BA in War Studies from King’s College London, where she was awarded the Sir Michael Howard Award for Excellence 2013-2016.

She has conducted fieldwork and research in the UK, Europe and East and Southern Africa.