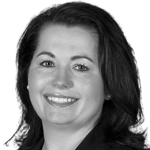 Iris is a Vice President and BSA Governance Manager at TIAA Bank and is responsible for advising bank business lines on new products, risk assessments, policy, procedures, training and compliance oversight testing. Prior to joining TIAA Bank in 2018, Iris held the title of AML Program Management Director at Ally Bank and also spent time at BB&T in a compliance testing role.

With more than 16 years of AML experience, Iris began her career as a bank teller for a large community bank. She moved on to various bank operation roles that lead her to a Deputy BSA Officer role overseeing a small Financial Crimes Intelligence Unit. In that role she had the opportunity to support the BSA Officer in the build of the BSA/AML program for the bank.

Iris holds a B.A. from the University of North Carolina at Charlotte and received her CAMS designation in 2005 and CAMS-Audit in 2015. She also worked on the ACAMS Task Force as a contributor for the current version of the CAMS Certification Examination and Study Guide.