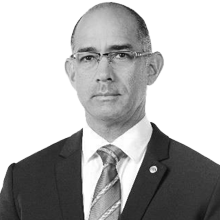 Mr. West graduated from the Hugh Wooding Law School in 1996 after which he worked in the Office of the Director of Public Prosecutions until 1999 where he left to work in the Ministry of the Attorney General, Central Authority Unit.

Mr. West is a former Head of the Central Authority Unit with over ten years’ experience in dealing with extradition and mutual legal assistance.

He was the Director Designate of the Financial Intelligence Unit from March 2010 up until 12th September 2010.
Mr. West in 2011 earned the Certified Anti-Money Laundering Specialist (CAMS) designation.

In July 2015, he was awarded the designation of Certified Financial Crime Specialist (CFCS).

He has also presented at numerous conferences both locally and internationally on Money Laundering and Financial Crimes.
Mr. West was in private practice during the period 2008-2014 in El Dorado Chambers where the late Ms. Dana Seetahal, SC was Head of Chambers.

On the 7th November 2014 the President of the Republic of Trinidad and Tobago appointed Mr. West Director of the Police Complaints Authority.