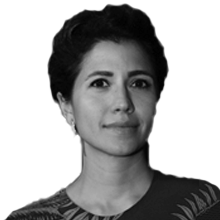 Ellie Geranmayeh is a senior policy fellow and deputy head of the Middle East and North Africa programme at the European Council on Foreign Relations. She specializes in European foreign policy in relation to Iran, particularly on the nuclear and regional dossiers and sanctions policy.

Geranmayeh advised European governments and companies on the nuclear negotiations between Iran and world powers from 2013-2015 and continues to brief senior policy makers on how to effectively safeguard the implementation of the nuclear agreement. Prior to joining ECFR, Geranmayeh worked at Herbert Smith Freehills law firm. She graduated in Law from the University of Cambridge.