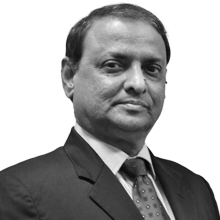 Mr. Abu Hena Mohammad Razee Hassan has been the Head of the Bangladesh Financial Intelligence Unit (BFIU) since 23 January 2012.

As the Head of BFIU, Mr. Hassan has played a lead role in developing a sound and effective anti-money laundering and combating financing of terrorism (AML/CFT) regime in Bangladesh. He is the Member Secretary of the National Coordination Committee on AML/CFT, and a member of the Working Committee on AML/CFT and the Anti-Militancy and De-Radicalization Committee. He is also the convener of the Central Task Force for Prevention of Money Laundering and Terrorist Financing.  Mr. Hassan played a significant role in exiting Bangladesh from the FATF ICRG process and obtaining Egmont Group membership. He has coordinated the national effort for the successful completion of the APG’s third round mutual evaluation of Bangladesh in 2015. He assumed the role of APG Co-Chair and successfully completed the term from 2018 to 2020. He has led the Bangladesh delegation on various occasions in APG, FATF, Egmont and other international events on AML/CFT. He frequently performs as key note speaker, panel member, moderator and inaugurates/concludes national and international conferences, workshops, trainings, seminars, symposium etc.

Mr. Hassan graduated with honors and obtained a post-graduate degree in economics from Dhaka University, Bangladesh. He has also obtained a Masters in Economic Development from Vanderbilt University, Tennessee, USA. Mr. Hassan has attended plenty of seminars, workshops and training programs on central banking and AML/CFT issues, including a three month course on Rural Finance at the Ohio State University, USA.