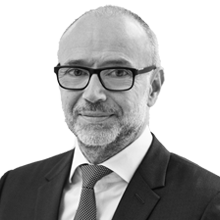 Chief Compliance Officer, Member of the Executive Board
Danske Bank

Philippe Vollot has been Chief Compliance Officer and member of the Executive Board of Danske Bank since November 2018.

After Philippe served for six years as legal counsel at the French Financial Services Authority, he joined Deutsche Bank in 1997 in order to head its Compliance Department in Paris. In 2001, he moved on to head the European Compliance Division at Barclays Capital. Philippe’s professional career then saw him come back to Deutsche Bank Group in 2003 as Head of Compliance for Continental Europe and General Counsel France before moving to Deutsche Bank in London as Head of M&A Legal UK in 2005.

In addition, Philippe was appointed as French Foreign Trade Advisor (CCE) by Decree from the French Government in 2019. The same year, he also became a member of the ACAMS Advisory Board.

Philippe holds a Master’s degree and a Postgraduate degree in private law from the Paris Descartes University.