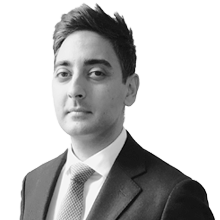 Rajeev has worked in London’s financial markets for over a decade having started his career in the front office with Lloyds Banking Group and subsequently at Barclays Wealth International. In the aftermath of the financial crisis, he worked on various Financial Crime change programs driven by regulatory demand delivering target operating models at   Santander and Lloyds where he also worked in an advisory capacity with a focus on Correspondent Banking & Financial Institutions.

At ACAMS, Rajeev was appointed as Financial Crime Subject Matter Expert for the EMEA Region, Rajeev was extensively involved in research and development of new ACAMS certifications, direction of programming for ACAMS conferences and facilitation & moderation of training; as well as network outreach and thought leadership in the Anti-Financial Crime space.

In his current role at Deutsche, Rajeev has taken his Anti-Financial Crime Training experience ‘in house’ as KYC Policy and Training Lead within the Corporate Bank; responsible for the design and launch of the KYC training framework for the first line of defence with a strong focus on instilling an AFC culture.