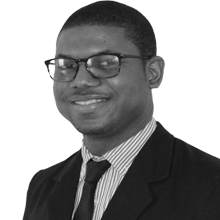 Oliver’s experience in counter-trafficking spans 9 years, having formerly served as Coordinator (ag) of the Ministerial Task Force on Trafficking in Persons and a Research Officer, both with the Ministry of Home Affairs in Guyana. Over his time with IOM and with government, he has organized and supported numerous counter-trafficking initiatives and presented at a number of training courses and other events on this subject. One such training course was aimed at fostering collaboration between the Guyana Police Force Trafficking in Persons Unit and agencies such as the Financial Intelligence Unit and the Special Organized Crime Unit of the Guyana Police Force on investigating the financial elements of trafficking in persons. In addition, Oliver has led the development of National Action Plans and Annual Reports on the subject of human trafficking and has overseen the finalization of Standard Operating Procedures on the Prosecution of Trafficking in Persons’ Cases and the Protection of Victims of Trafficking in Guyana. Oliver also holds a Bachelor’s Degree in Economics from the University of Guyana and was an alumnus of the International Law Enforcement Academies (ILEA) in Roswell, New Mexico, United States of America and San Salvador, El Salvador.