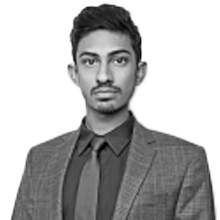 Sahil Shah is a Policy Fellow at the European Leadership Network (ELN), focusing on improving the global nuclear non-proliferation and disarmament regimes. In particular, Sahil leads the ELN’s Iran portfolio, offering policy advice to a range of government stakeholders on topics pertaining to nuclear diplomacy and regional de-escalation. As part of this work, Sahil is a regular commentator on outlets such as Al Jazeera, Sky News, and China Global Television Network. He also leads the ELN's work on New START, as well as contributes to other topic areas such as efforts to strengthen the Nuclear Nonproliferation Treaty (NPT). His work has been featured in the Washington Post, New York Times, Guardian, Newsweek, and more. Separately, he is also a Policy Advisor to the Institute for Security and Technology.

Sahil was previously a Policy and Outreach Consultant to the Executive Secretary at the Comprehensive Nuclear-Test-Ban Treaty Organization (CTBTO) whilst also holding a Graduate Fellowship at the Nuclear Nonproliferation Education and Research Center (NEREC) at the Korea Advanced Institute of Science and Technology (KAIST). He holds an MPhil in International Relations and Politics as the Bender Scholar to the University of Cambridge in 2017.

Whilst pursuing his BA in International Affairs from the George Washington University, Sahil began his work in the field as a researcher for 19th U.S. Secretary of Defense William J. Perry, helping found the William J. Perry Project. Since then, he has contributed to bilateral work between the US and Russia as the Director of Research of the Stanford US-Russia Forum (SURF), as well as multilateral work through various initiatives including IST's predecessor – Technology for Global Security (T4GS) – when it was first launched, the Nuclear Security Project (NSP) at the Nuclear Threat Initiative (NTI), and the CTBTO Youth Group (CYG) of which he is a founder.