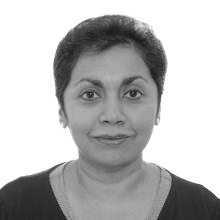 Ros is a former deputy public prosecutor with the Commercial Affairs Department at the Ministry of Finance in Singapore, and a former litigation partner with Drew & Napier. She joined the financial sector in 2005, starting with Citi Private Bank (CPB) as a member of the Global AML Team, and was responsible for the review and development of globally consistent CPB AML policies. Her role subsequently became regional to include oversight of consumer and corporate banking. Her responsibilities included Asia-Pacific AML policy development, governance/reporting and training.

In 2010, Ros joined CPB’s internal audit team. In November 2010, as part of the CPB-Asia team, she audited various controls and processes of private banking, as well as the trust and brokerage, with a special focus on anti-money laundering/counter-terrorist financing controls. She returned to her former AML role when she joined Standard Chartered Bank in November 2013 as country head of financial crimes risk for Singapore.

Ros holds a master’s degree in law from the Columbia School of Law in New York.